Katharine Marjory Ramsay was born on the 6th November 1874 at her family home Bamff House in Alyth, Perthshire. Katharine – or Kitty as she was normally called – was a studious child more often than not found with her head in a book. Kitty excelled in music and composition and in 1892 she entered the Royal College of Music.

In 1896 Lady Charlotte was invited with her eldest daughter Kitty to the annual Atholl Gathering and house party at Blair Castle. Kitty was not impressed and attended under protest, even taking books, music and her bicycle as ways to pass the time.

Lord Tullibardine, heir to the 7th Duke of Atholl, or ‘Bardie’ as he was known, was intrigued with Kitty and invited her for a tour of the Castle grounds. However much to Kitty’s displeasure, he brought another young lady for the tour expecting Kitty to follow behind. Kitty quickly turned back, when he followed and asked why she had left Kitty very quickly set him right!

She was clever, spirited, and independent – not something Bardie had encountered before. They spent the rest of the weekend in lengthy conversation walking around the estate. Kitty met a man who could hold a philosophical discourse, was amusing and had a fascinating and striking personality.

Bardie wrote to Kitty and a love affair of the heart began. They became secretly engaged, finally marrying on the 20th of July 1899.  Kitty was not unaware of what marrying a Duke would mean to her life or the commitment it would require. One of the things she would have to give up was her music studies. 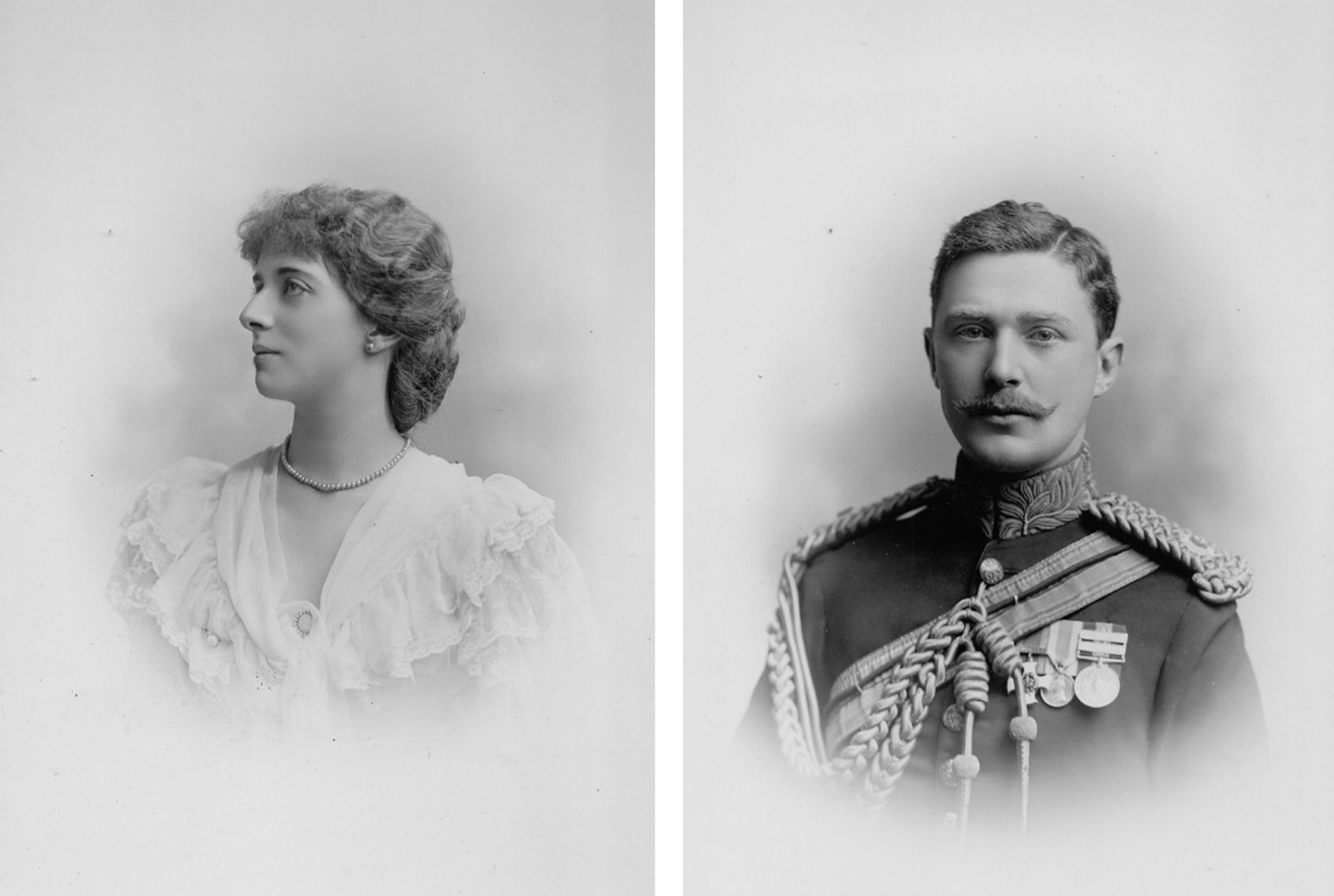 As World War began, Bardie and his regiment the Scottish Horse were deployed to the Gallipoli peninsula. Bardie, as usual, could not bear to be parted from Kitty and arranged for her to sail to Egypt in October 1915.

Once she arrived, Kitty visited the hospital in Alexandria where many soldiers were being treated, including her brother Douglas. Kitty wrote letters home for them, helped them to eat and read to them.

This is where her involvement with nursing and the Voluntary Aid Detachment nurses began. This led to her becoming chairman of an executive committee that arranged concerts for the troops. With the evacuation of Gallipoli, Kitty realised there would be a large number of casualties so she secured the house to be used as a convalescent home.

In January 1917, with the death of the 7th Duke, Kitty became a Duchess. The newspapers used quotes such as ‘A good speaker and organiser….Petite, graceful, dark-haired, and charming…..kindest and brightest of women…devoted to life in the Highlands’.

As the war continued, Kitty opened up the Castle ballroom and North wing as a convalescent home. This was to be staffed by excellent nurses from the VAD and the Red Cross – both organisations Kitty was heavily involved in. 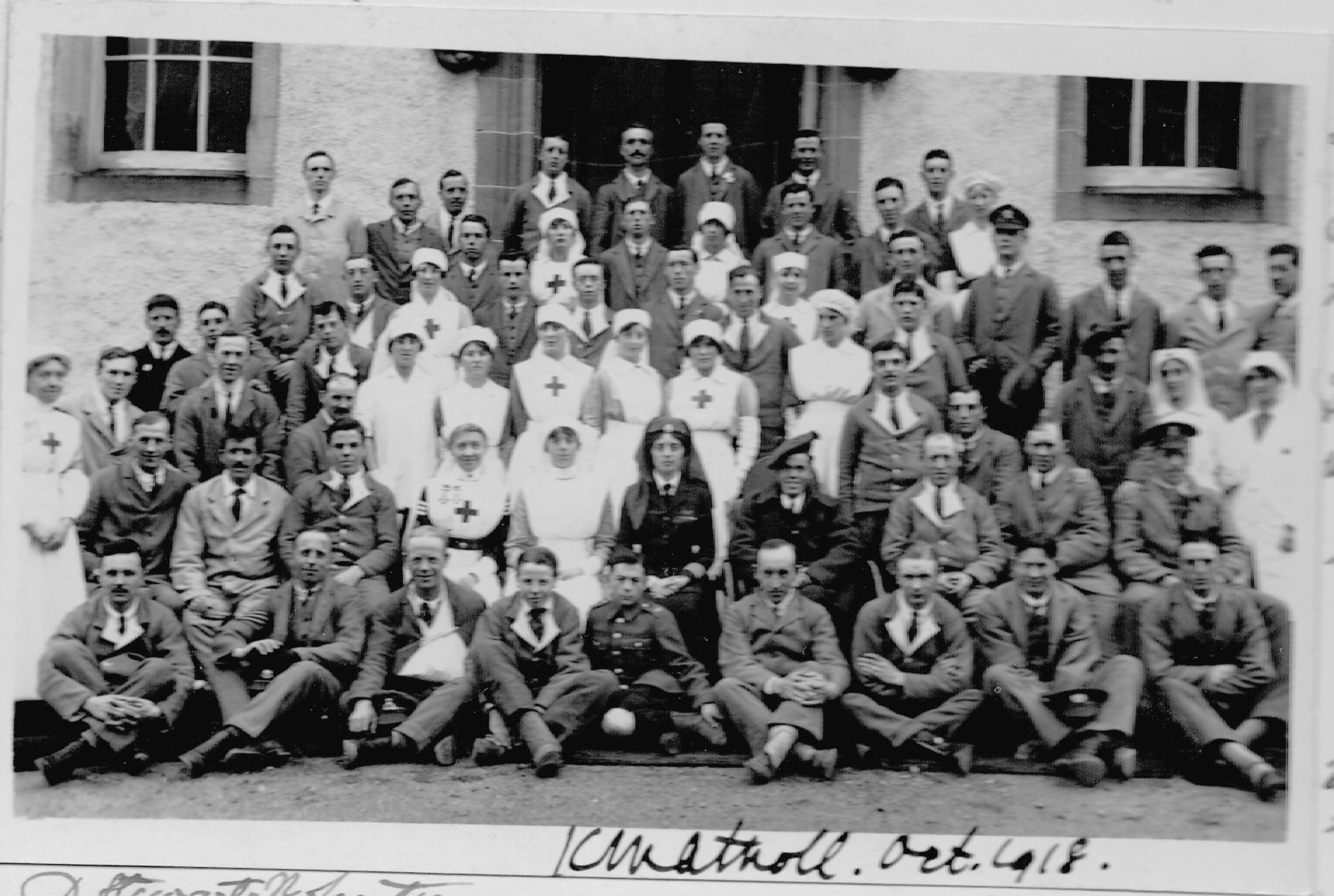 Her Life in Parliament

The nation, including Kitty and Bardie, was relieved the war was finally over. Back at Blair, Kitty settled down to Highland life in her own indomitable style. She was elected to the County Education Authority of Perthshire, as the Highland District Member and by 1920 she was on over 25 Committees.

What all of these had in common was Kitty’s unfailing desire to help others in need or distress – and using her intelligence, political shrewdness and vast amounts of energy – she did just that.

Lloyd George, the then Prime Minister was keen to have more women in the House of Commons and suggested just that to Duchess Kitty. With support from Bardie, she stood as a Conservative candidate for West Perthshire and won in 1923, becoming one of only three women in Parliament.

Duchess Kitty took her seat in Parliament in 1924 and became the first Conservative women minister in the Department of Education, a position which she held until 1929. 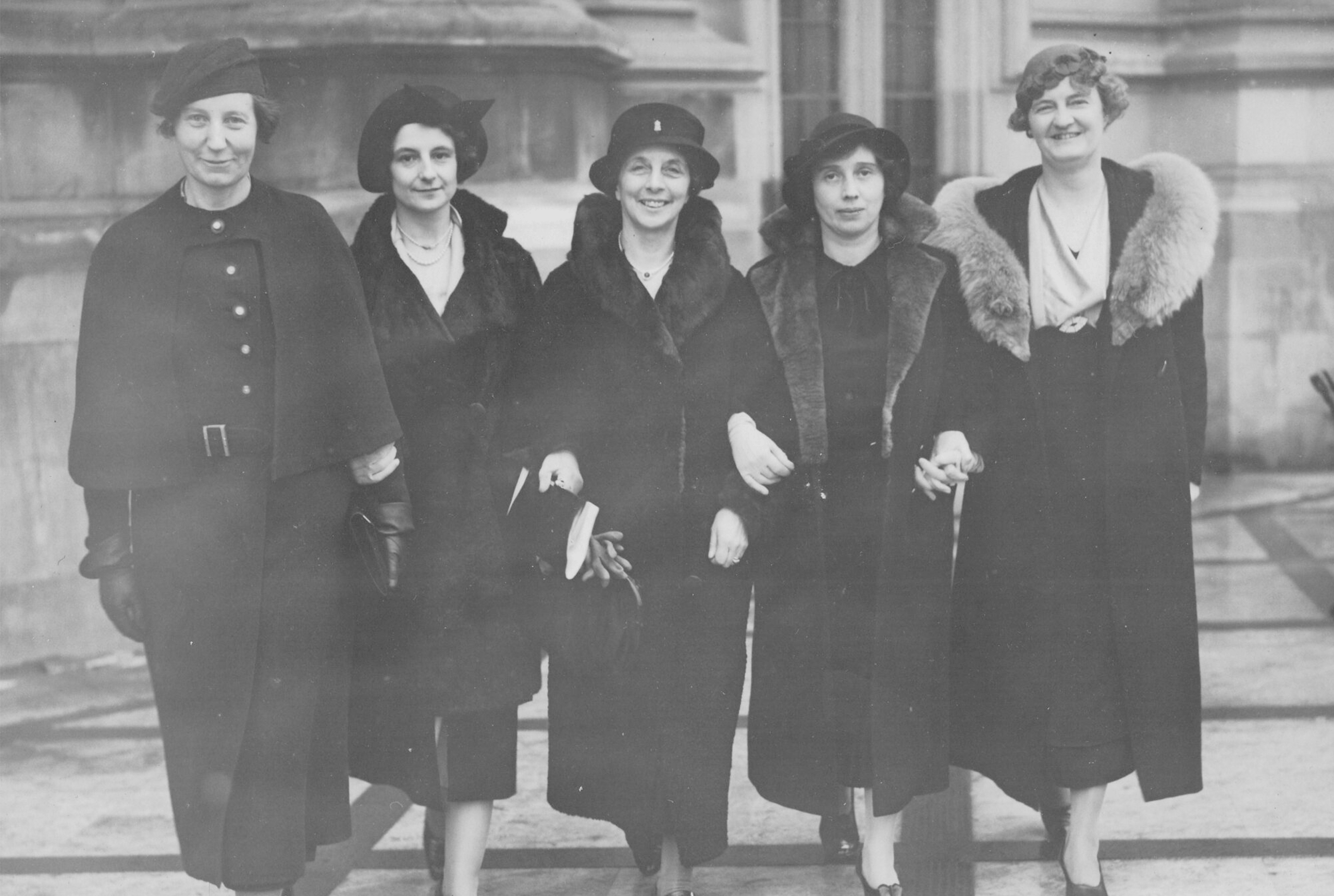 Kitty became more and more concerned with foreign affairs, particularly in relation to women and children. With this in mind, she established a committee looking into female circumcision (FGM).

A particularly unpopular topic, this did not deter Kitty and she raised the issue in Parliament with only two other female MPs present. FGM is a topic still relevant today as it was made illegal in 1985 and with the first successful prosecution in 2019, Kitty would have approved.

In 1931, Kitty produced Conscription of a People that she had written after her usual careful, thorough research on official Russian publications and from interviews with refugees. This exposed the horrors of the Russian labour camps, the seizures of property and the secret police campaign of terror.

In 1933, an English version of Mein Kampf by Hitler was published, it outlined Hitler’s political ideology and future plans for Germany. Kitty was very alarmed by this, having read the original German version. She spoke to fellow politicians sharing her fears about Hitler, even going to the effort to produce an accurate translation of the book.

By 1936, the Spanish Civil war had broken out. It was seen as a struggle between democracy and fascism lead by General Franco. Kitty travelled to the Spanish war zone in 1936 with two woman MPs to see for themselves the conditions.

They were shocked by the destruction caused by the fighting and how it was affecting people. She visited prisoners of war held by the Republicans and considered the impact of the conflict on women and children, in particular.

Duchess Kitty took action and arranged for the evacuation of 4,000 children to Britain. Kitty also wrote a book about her experiences called Searchlight on Spain highlighting the plight of the Spanish people. It is from this involvement in the Spanish Civil War she earned her nickname the ‘Red Duchess’.

Duchess Kitty was losing patience with the British government, feeling her warnings about Hitler and Germany were going unheeded. With her continuing interest in foreign affairs, Kitty’s Perthshire constituency association were feeling her lack of support, particularly in relation to the party.

As ever, Kitty remained true to her principles and views. She resigned her seat provoking a by-election in which she stood as an independent candidate. The local conservative party raised a vicious campaign against the Duchess, backed by Prime Minister Neville Chamberlain and all the resources of the party.

Unsurprisingly faced with all of this, Kitty lost the election but only by a small margin. Sadly her predictions about Hitler proved true when he invaded Poland a mere nine months later.

Duchess Kitty returned to Blair Castle but still maintained a healthy interest in all matters political and was often called upon for her views by newspapers and politicians. She always remained active and when Bardie died in 1942, she was invited to become Honorary Colonel-in-Chief of the husband’s old regiment the Scottish Horse, which she did with great pride.

In 1958, Kitty published Working Partnership about her life with Bardie, telling her audience, ‘I have enjoyed the battles of my life’. Kitty died in 1960 and is buried beside Bardie in the small family plot at Blair Castle.

Kitty pictured here in later life with the 10th Duke. 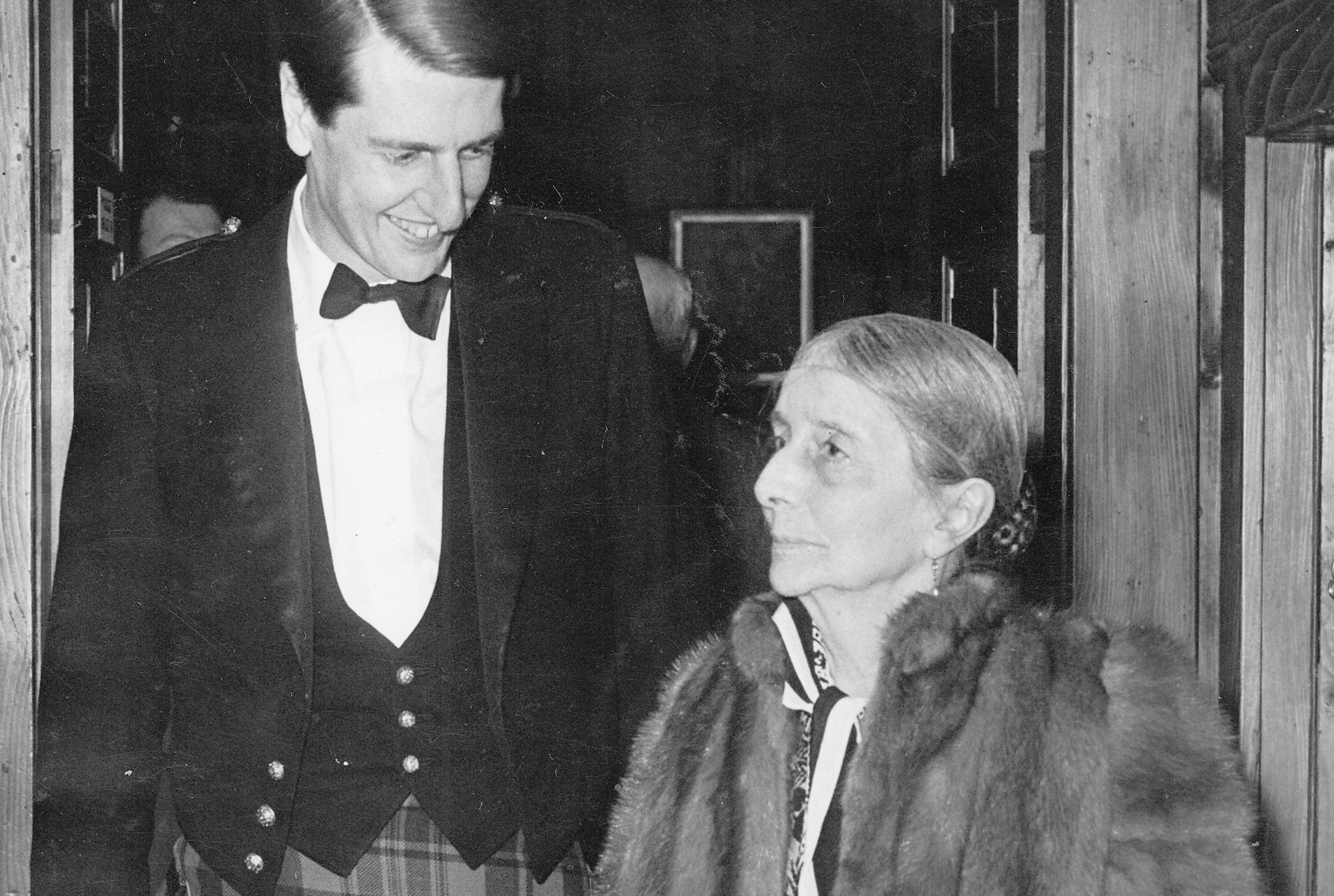