Atholl Highlanders Parade
Book Tickets
The Atholl Highlanders are a Scottish ceremonial infantry regiment. They are the only remaining private army in Europe and act as the personal bodyguard to the Duke of Atholl - Chief of the Clan Murray - who have thrived in Perthshire for some 750 years.
To join the Atholl Highlanders, an invitation must be made from the Duke, who specially selects people with ties to the estate or the local area. The regiment is not part of the British Army but under the command of the Duke of Atholl and based at Blair Castle, in beautiful Highland Perthshire. 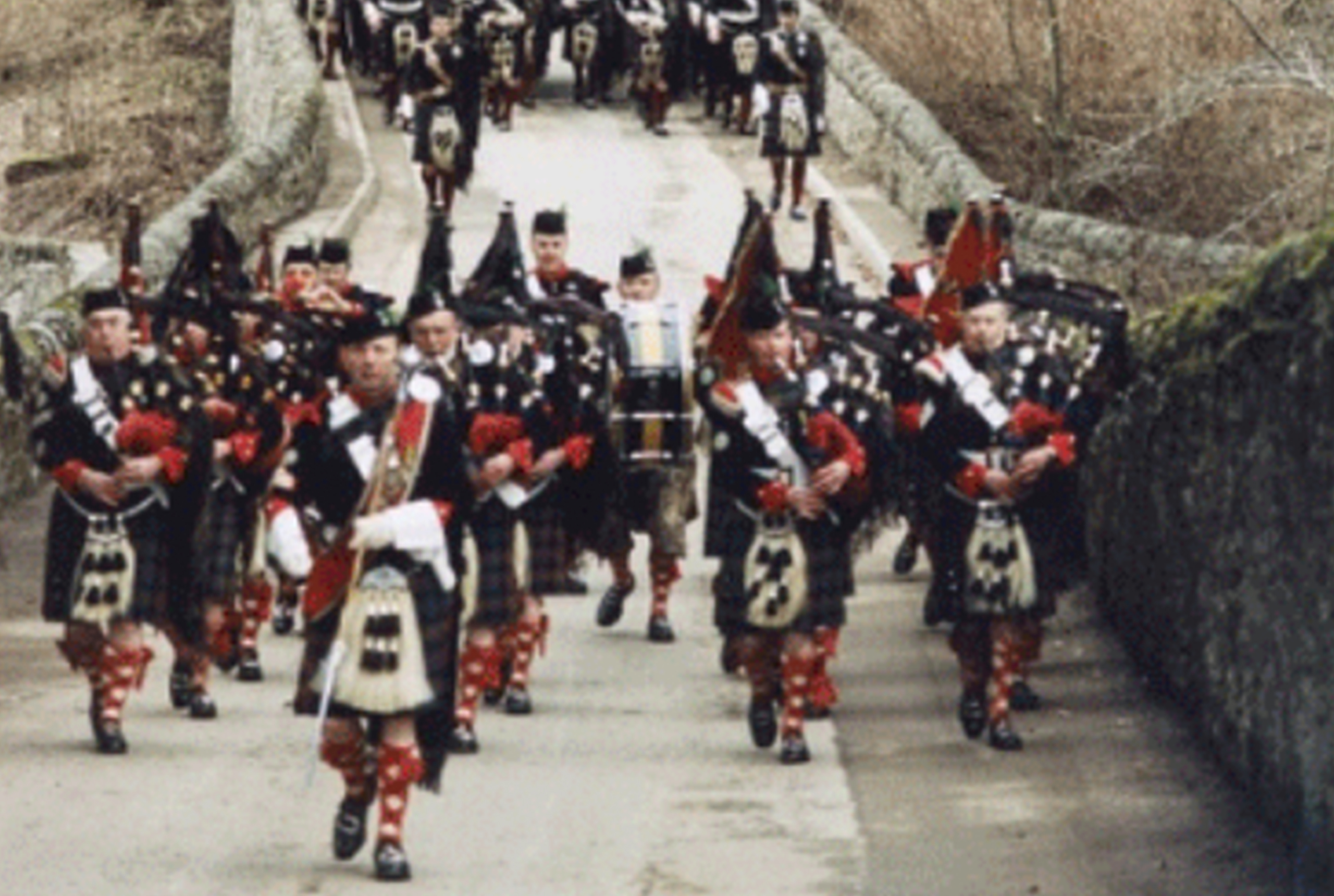 First Raising as a Regular Regiment in the British Army

The regiment was raised in Perthshire by John Murray, 4th Duke of Atholl as the 77th Regiment of Foot (or Atholl Highlanders, or Murray’s Highlanders) in December 1777. The regiment was formed as a relief for other regiments serving in North America and spent most of its existence in Ireland.

It is here that Finn’s 6x great-grandfather James Thomson, born in 1713, is farming by day and, as dusk falls, distilling a secret that will one day become his family’s legacy: aqua vitae, the water of life.

His is a tale of adventure, graft and rebellion. 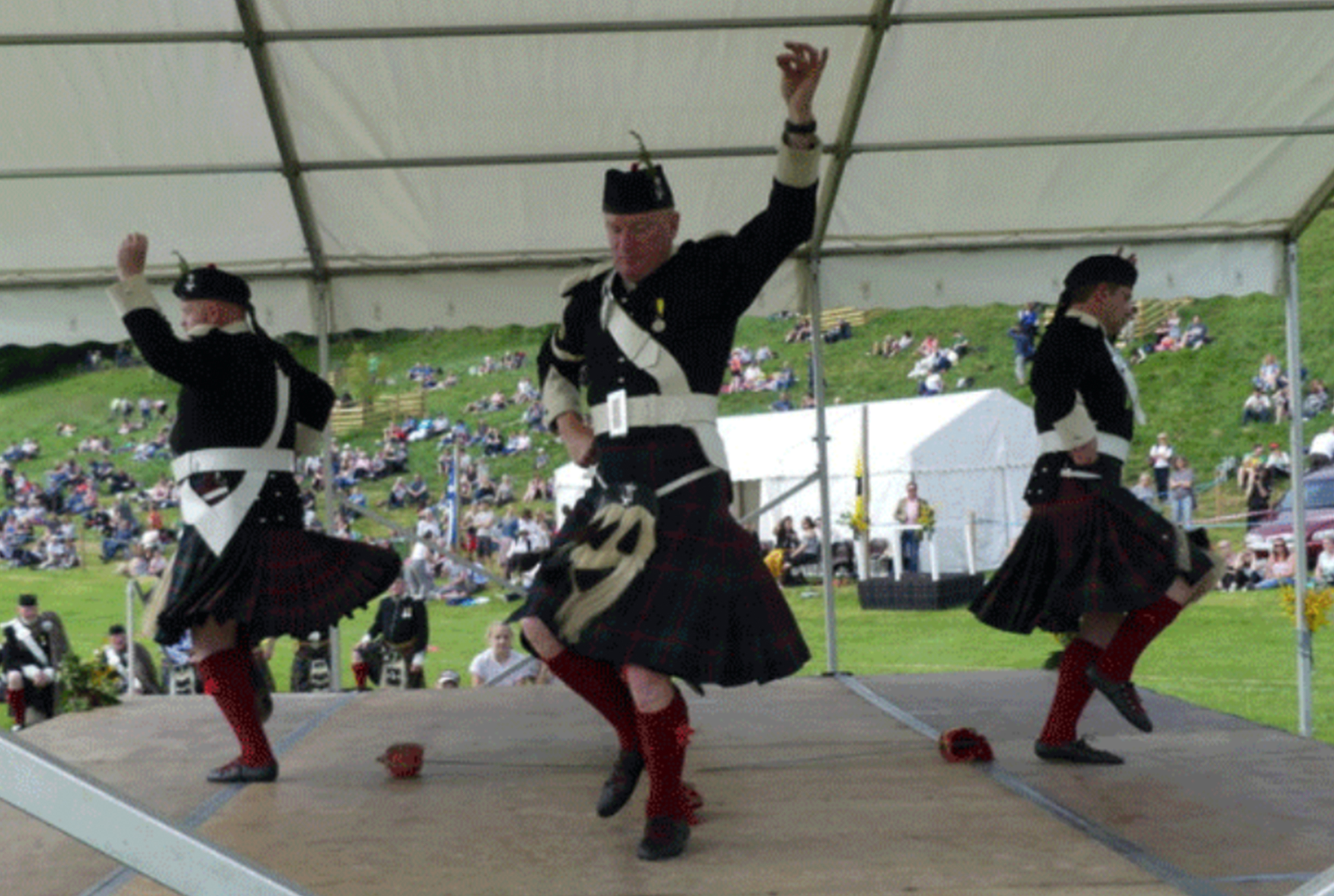 Second Raising as a Private Regiment of the Duke of Atholl

in 1839, More than 50 years later, George Murray The 6th Duke of Atholl, as Lord Glenlyon, formed the regiment as a bodyguard, which he took to The Eglinton Tournament at Eglinton Castle, Ayrshire. Three years later, in 1842, the regiment escorted Queen Victoria during her tour of Perthshire and in 1844, when the Queen stayed as a guest of the Duke at Blair Castle, the regiment mounted the guard for the entire duration of her stay.

It is here that Finn’s 6x great-grandfather James Thomson, born in 1713, is farming by day and, as dusk falls, distilling a secret that will one day become his family’s legacy: aqua vitae, the water of life.

His is a tale of adventure, graft and rebellion. 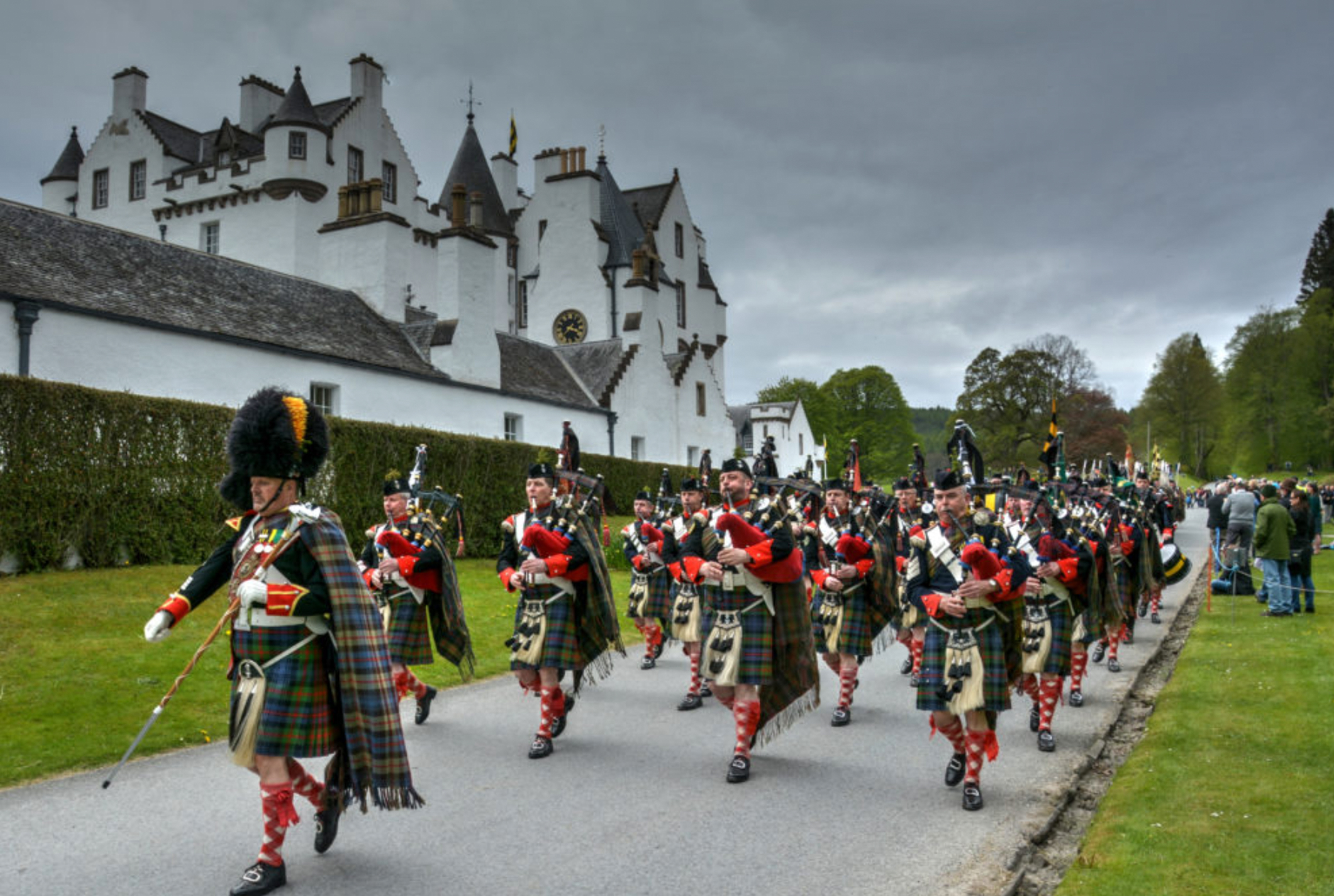 Reformation of The Atholl Highlanders

After 1933, there was little activity and it seemed the regiment went into abeyance until in 1966 when it was reformed by Iain Murray, 10th Duke of Atholl, who made the decision to revive the regiment’s annual parade. Eight local men – mostly estate employees – and all with previous military service training were invited to join, seven accepted. They paraded on the 8th of April 1966 at Blair Castle for the first time in 33 years.

They marched past the Duke, led by two Atholl Highlander pipers.

In 1973 one hundred years after the 7th Duke of Atholl attended the Braemar Gathering, the Atholl Highlanders returned. The regiment marched into the arena to the tunes of ‘Glendaruel Highlanders’, ‘Leaving Port Askaig’ and ‘Jean Mauchline’.  The salute was taken by the Duke of Atholl and the large crowd of 23,000 gave the Highlanders a rousing welcome.

In the afternoon the Atholl Highlanders went on parade, marching past the HRH Queen Elizabeth, the Prince of Wales, the Queen Mother, Prince Andrew and Prince Edward. 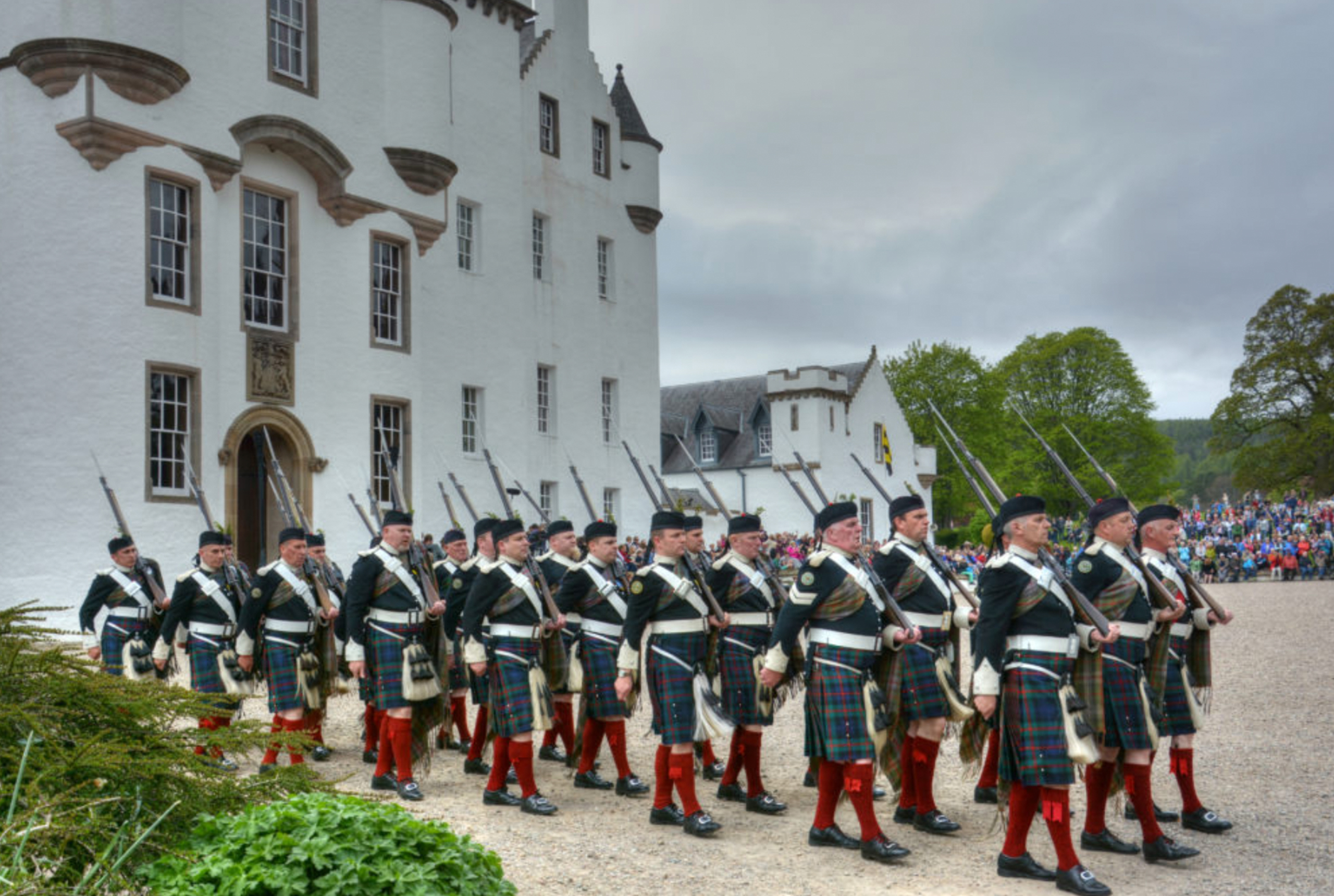 The Reintroduction of the Atholl Gathering

The 2nd of June 1984 saw the reintroduction of the Atholl Gathering, last held at Blair Castle in 1913. The games took place in Target Park on the east side of the front castle drive, with over 3,000 people attending. Athletes came from all over Scotland and far-flung places such as Nigeria and Iceland, to compete. They tossed cabers, threw hammers and other feats that are typical of highland games.

It continues as an annual event on the Sunday after the Atholl Highlanders parade, which is normally the last weekend in May. 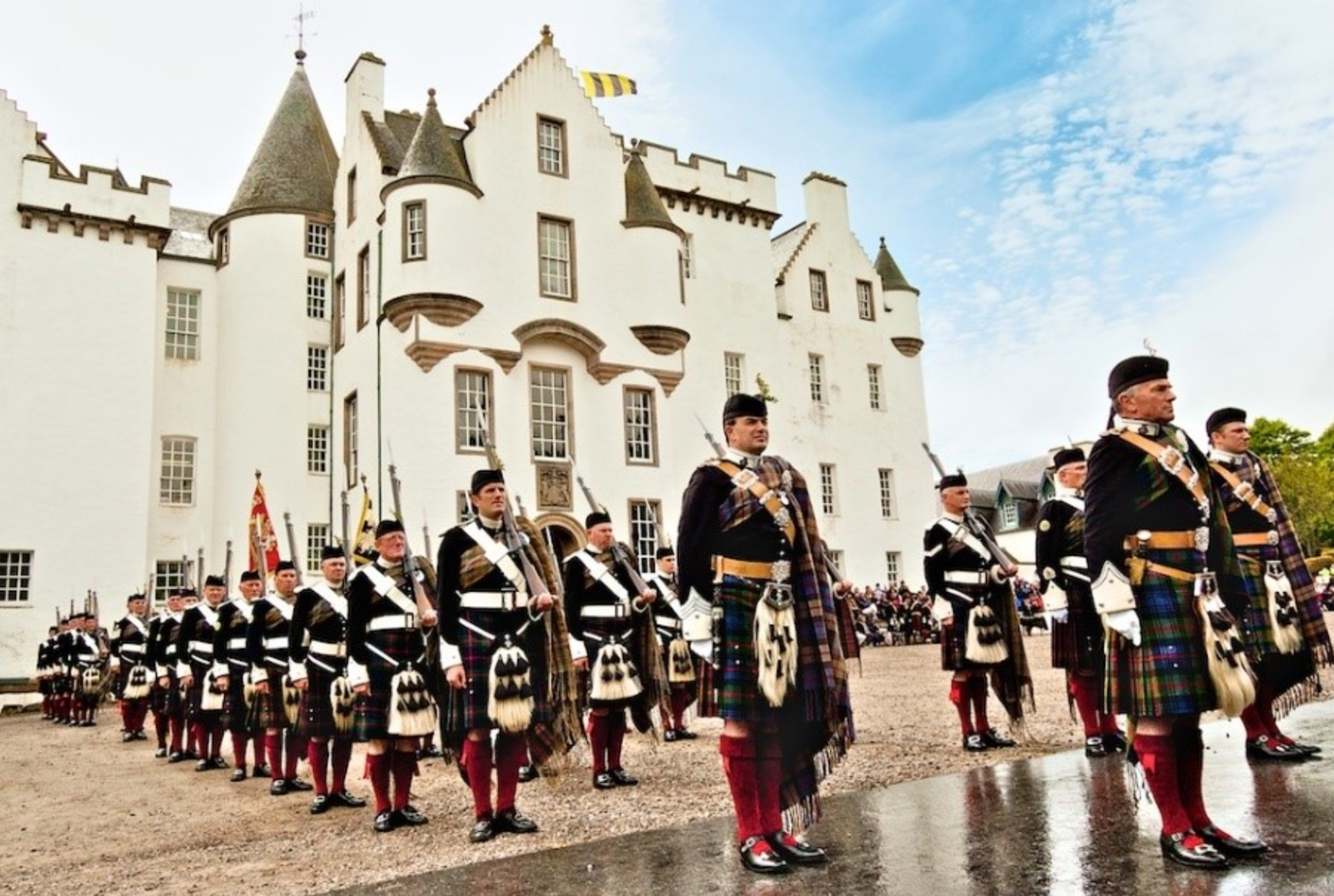 The Passing of the 10th Duke of Atholl

The 10th Duke of Atholl died on 27th February 1996. His funeral was held in the ballroom of Blair Castle. After the service, six Highlanders acted as pallbearers, others provided the carriage party and lined the route to the Castle graveyard at Old Blair.

It was feared that the regiment would be disbanded following the 10th Duke’s death in 1996, until his successor, John Murray, 11th Duke of Atholl, wrote to the estate trustees accepting an invitation to continue his traditional role. The 11th Duke, although resident in South Africa, visited Blair Atholl almost every year to inspect the regiment’s annual parade until his death.

The 12th Duke continues this tradition. New members are admitted to the regiment from time to time, maintaining the numbers at around 100 men, including the band. All of them are required to achieve a reasonable standard of foot and arms drill.

During the Year of Homecoming in 2009, all of Scotland’s clans took part in a parade in Edinburgh. The Atholl Highlanders paraded in the Scottish capital for the first time in nearly 30 years. The Regiment is often invited to tour and parade in other countries that have historical links with Blair Castle, the Dukes of Atholl or the regiment.

In 2011 they paraded at Braemar Highland Games where they presented their colours to the Queen. They also paraded at Windsor Castle as part of the Queen’s 90th birthday celebrations and in 2018, visited the war graves in Europe.

Today the Atholl Highlanders continue with the current Duke Bruce Murray, 12th Duke of Atholl as their Colonel in Chief.