Halloween Special – Spooky Stories from Atholl Estates over the years…

The Witch of Beinn a’Ghlo Mountains

Legend has it that in the mountains overlooking the Castle and Hercules Garden, an infamous witch hid amongst the corries and hills. Using her powers, she would shape-shift to take the form of an eagle, a deer or even a raven and terrify local people driving their cattle into mires, she’d ride their horses till they collapsed with exhaustion – and it’s claimed she even destroyed a bridge! There have even been poems written about her: ‘She heard him on her mount of stone: Where on snakes alive she was feeding alone.”

The last reported sighting of the witch was in Glen Tarf in 1733.  Two poachers were caught in a terrible snowstorm when they came upon a shieling (a hut) where a gnarled old crone opened the door and welcomed them in. She gave them a hot meal and produced a rope containing 3 knots explaining that each knot gave her the power over wind, snow and rain. The witch – for it was she – told them she would provide them with good wind for deerstalking, if they provided her with venison on the first Monday of every month during the season. The witch told the poachers to place a ‘fat hart’ behind Fraser’s Cairn,  with the words “if you neglect this my bidding, foul will befall you, and the fate of Walter of Rhuairm shall overtake you; you shall surely perish on the waste; the raven shall croak your dirge; and your bones shall be picked by the eagle.”

For fear of feeling her wrath, this they did and never again did a storm disrupt their poaching. But nor was the witch ever seen again…

However, witches and witchcraft were not limited to the hills and forest above Blair Castle. In 1562, even Margaret Countess of Atholl was falsely accused of witchcraft but, fortunately, it was proven otherwise.

The Scottish witchcraft panic of 1597 was a year that saw large-scale witch hunting around Scotland, especially in the area around the Castle. At a time of political and religious instability, the arrival of a famine was blamed on witchcraft. Even before then, it was rumoured that the Earl of Atholl had conducted a witch-hunt, using two imprisoned witches to help find others.

The local village itself was known as a gathering place for witches and it was recorded that “both of men and women ther was in May att one convention upon a hill in Atholl to the number of 2300 and the Devil amongst them”, possibly the biggest gathering of its kind in Scotland ever…

In Glen Tilt roams the ghost or spirit of a shepherd known as the Whistler.  Local shepherds have heard him chivying the sheep along – they hear him but he’s never been seen.

One shepherd claimed that on wet dark stormy night, when the River Tilt was in full spate, he said to his friend ‘we won’t hear the Whistler tonight’.

No sooner were the words out of his mouth when someone whispered clearly in his ear: ‘I created the spirit laws. I went round by the bridge and here I am.” At that, both shepherds took to their heels and ran, never to be persuaded to return to the Glen.

In more recent times, a story from the 1920s tells of two poachers who take shelter in a bothy in the Glen. During the night, they were attacked by a creature who tried to drink the blood of one of the men before they were able to fight it off. Depending on who tells the tale, it either flew off or simply disappeared. Could this have been a baobhan sith’ (pronounced baa’-van shee)? Known as Scottish vampires, was this one of the blood sucking fairies who haunted mountain paths and the low roads of the Highlands, where they preyed on unsuspecting travellers, pilgrims, and hunters? 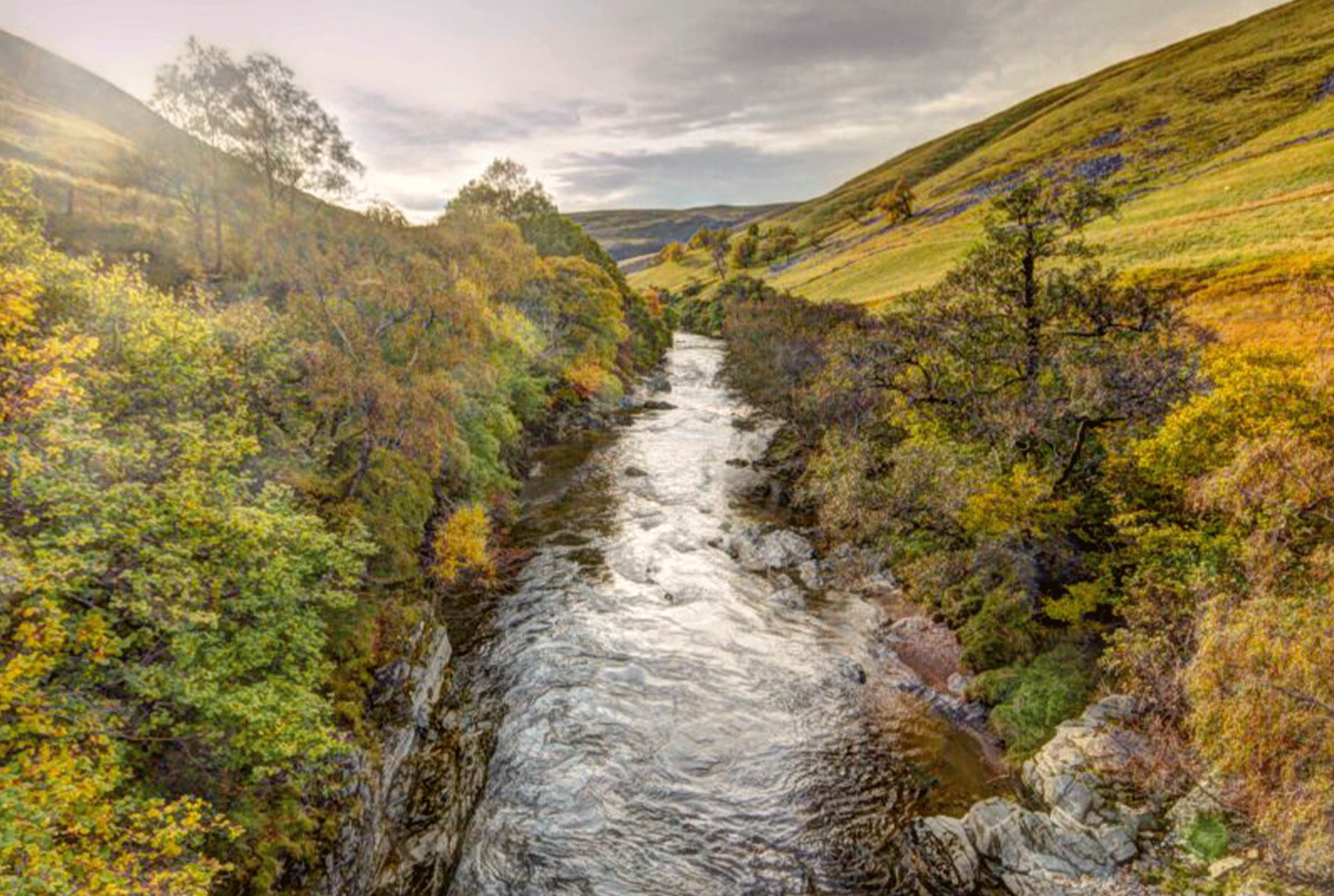 The Fairies of Meall Dail Min

Not far from the Castle was Lude, where just before Christmas, there was a burial where the mourners came to toast the grave until they were quite merry. One man thoughtlessly kicked a skull and, laughing, said: ‘come and have a Christmas dram with me’.

It was all forgotten until on Christmas Day, the skull came to the house, in human form, telling the wife of the man, that he had received an invitation from the master of the house to come for a dram. Not wishing to be inhospitable, the woman happily gave the visitor bread, butter, cheese and milk, the man ate everything not a crumb was left. The wife went to a neighbour’s to get more food –  and he devoured all of that too! Once he had finished eating, he thanked the wife and asked her to tell her husband to come share New Year with him in return.

The invitation was forgotten until one day, while tending his sheep, the man passed a cave. From within, there came the most melodious music that drew him in to stop and listen. But as the man made his way home, a neighbour stopped him to ask where he had been all year.  Confused, he returned home only to see that his son, who’d been a tiny baby when he’d left home that day, was now sitting up and crawling… Only then did he realise that the fairies had lured him in and kept him for a year.

In 1630, John Stewart, from Auchgobhal in Glen Tilt, murdered a man named Shorry because he had disrespected him. After going on the run, Stewart was finally captured and imprisoned. As he was not at all well liked, many celebrated his imprisonment. None more so than McIntosh, a forester in Glen Tarf, whose beat adjoined Stewart’s.

Unbelievably, despite all the evidence, Stewart was released. Hearing of McIntosh’s delight at his imprisonment, Stewart began plotting his revenge. He invited McIntosh and his ghillie for a day of shooting on one of the Bienn a’Ghlo mountains.

After stalking all day, they retired to a bothy for the night.  Stewart took his revenge on McIntosh, killing him instantly by plunging a knife in to his heart. Having done so, he asked his own servant to kill McIntosh’s ghillie. Although the man didn’t want to, he feared for his own life. So, carefully, he stabbed him ensuring that the wounds would not be fatal.

Luckily, the ghillie realised what was happening and feigned his own death. Stewart threw the ghillie’s body on top of McIntosh and left.

However, he began to worry that when the bodies were found, the ghillie should be underneath his master’s to give the impression that the two had fought and killed each other.

So Stewart returned to the bothy. But as he was rearranging the bodies, he became suspicious that the ghillie might be alive.  To confirm that the poor man was dead, he slashed the soles of his feet several times with his dirk.  Although in excruciating pain, with supreme effort and strength of will, the ghillie remained motionless until Stewart departed. Then, unbelievably, he managed to crawl to Dail Fheannach and raise the alarm.

John Stewart went on the run heading north, followed by 33 loyal men chosen by the Earl of Atholl to hunt him down.  In Caithness, they caught up with him at a party in an inn where, having joined revellers drinking a toast to Stewart, at a secret signal the men grabbed him.

When captured, it’s claimed he sang the following:

“Curs’t be the beer that banished my fear

Till they caught inawares at the Ball

The 30 and 3 chased my swiftness from me

Then to prison with ropes they did have me.”

Despite many attempts to escape, John Stewart was finally executed at Hangman’s Knoll in the grounds of the Castle in 1630, the last public hanging on the Estate. In 1755, the Earl of Atholl built the Balvenie Pillar on that very spot to recognise the event.